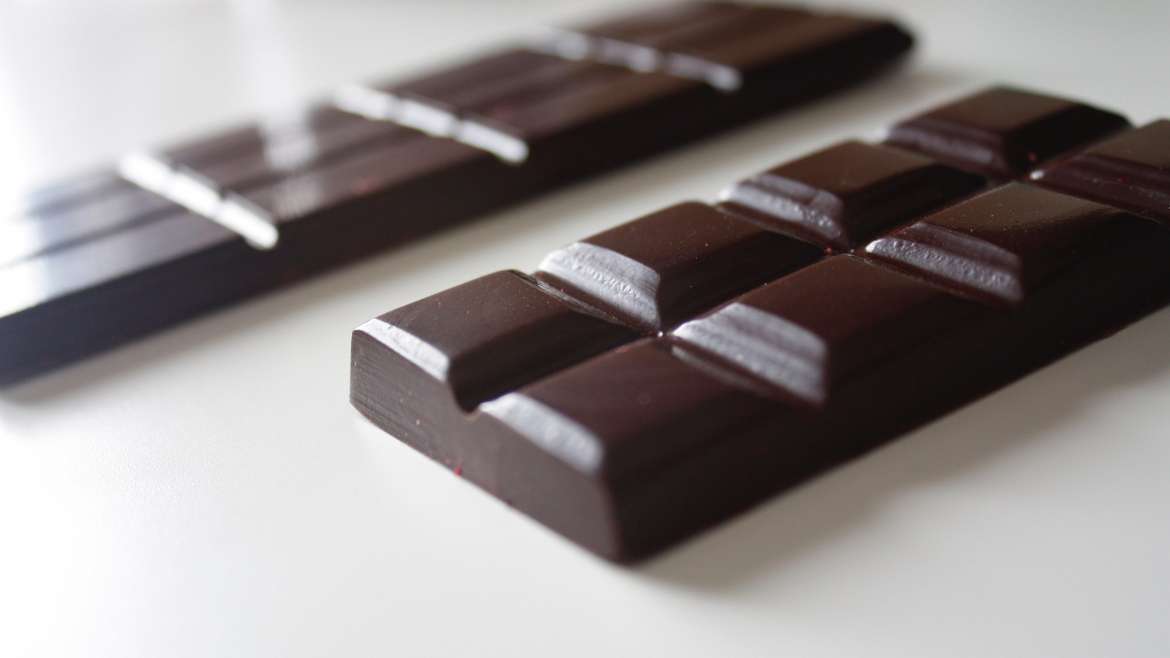 Chocolate is produced from the seed of the cacao tree.

Unfortunately for many home gardeners eager to have their own stash of chocolate, trees grow only in tropical regions: Central America, the Caribbean, Indonesia, and Africa.

Cacao production is labor-intensive. Trees require hand harvesting and machetes, as the pods can reach a size comparable to butternut squash and hold between 30 and 50 beans.

Cacao trees grown in the wild with shade can maintain production for nearly 100 years. Take that, biennials. The beans, about the size of almonds, are allowed to ferment for 3 to 7 days and then dried. This fermentation is essential — the raw seeds are very bitter.

After fermentation beans must be sorted, cleaned, and weighed before roasting.

After roasting, the beans enter a machine that cracks the seed coats and blows them away, leaving behind cacao nibs, which are 47% cocoa solids and 53% cocoa butter.

Cocoa butter (from cacao) is the main source of fat in chocolate. The cocoa solids are ground into cocoa powder, the same stuff that flavors your chocolate protein powder.

Cacao nibs left after bean cracking can be milled into a “nut butter”-like paste, called chocolate liquor (alcohol free), which can then be pressed.

The chocolate liquor on its own is dry and gritty. It can be combined with other ingredients like sugar, vanilla, and lecithin to make a more palatable product, and/or be broken down on machinery and kneaded for days to improve the texture. Careful heating and cooling will create a stable structure.

Back in 250-900 A.D. the Mayans noticed a wild tree (cacao tree) occupying rain forests in South America and figured out it could be cultivated. They would ferment, roast, and grind the beans, similar to what we do today.

But the Mayans didn’t have a “Willy Wonka Factory” with helpful machinery to produce a variety of confections. Instead, they enjoyed chocolate as a beverage, with ground beans, water, chile, vanilla, black pepper and cornmeal, sweetened with honey.

To Mayans, cacao was valuable stuff. It wasn’t consumed on a regular basis, but often used as part of tradition and rituals. Cacao beans were also used as a form of currency.

The industrial revolution changed the chocolate “experience.” The cocoa press was invented in 1828 to separate chocolate into cocoa butter and solids (cocoa powder). Between 1875 and 1894 the names “Nestle” and “Hershey” became more popular with the development of milk chocolate and mass production of chocolate bars spanning the globe. Specialized chocolate companies have only been popular since the 1980s. Made from 100% cocoa liquor and bitter unless mixed with other ingredients. ( I learned this when I took a bite of my mom’s unsweetened baking chocolate at the age of 7.)

Dark chocolate can contain no milk powder and must have a minimum of 35% cocoa solids. Bittersweet and semisweet are similar and differ based on the percentage of sugar.

At least 10% chocolate liquor and 12% milk solids. Also has more sugar than dark or semisweet.

Well, it’s not really chocolate, as it’s made from cocoa butter, sugar, and flavorings.

A crushed and ground solid left after cocoa butter is removed from chocolate liquor. Cocoa powder is typically unsweetened.

Why is chocolate so important?

We eat a lot of it

Chocolate is a divine, celestial drink, the sweat of the stars, the vital seed, divine nectar, the drink of the gods, panacea and universal medicine.
–Geronimo Piperni (1796)

Now, people usually eat it because it tastes good.

North Americans eat about 12 pounds of chocolate per year, not quite placing in the top 10 for worldwide consumption. In 2001, Americans consumed 3 billion pounds of the stuff, which totaled about $13 billion in sales. (By comparison, the sale of all other non-chocolate candy items in 2001 was $7.6 billion.)

Chocolate is a frequent snack item. Nearly 70% of chocolate is consumed between meals.

This is your brain on chocolate

Chocolate may have effects on people’s moods. Most chocolate is eaten in the winter, which suggests that people often use it as a way to beat the seasonal blues.

Chocolate may also improve cognitive performance, according to some studies. Other studies show no benefit.

Traditional chocolate is one of the most concentrated sources of natural antioxidant plant compounds, called flavonoids. Cocoa products account for a major proportion of flavonoid intake in Western countries.

Flavonoids are bitter and astringent (again, you’d know this if you’ve ever eaten 99% dark chocolate or cacao nibs). This is why many companies add sugar and milk fat (think Kit-Kat).

Unfortunately these “additions,” along with other processing methods, can inhibit the absorption of the flavonoids. Foods rich in cocoa may reduce blood pressure, which could be due to flavonoids, since they can modify the production of inflammatory modulators and dilate blood vessels in the body, similar to omega-3 fats. While some research has shown that cocoa is associated with a lower incidence of experiencing a cardiovascular event, other studies indicate no benefit (unless you consider a higher heart rate a health benefit).

Inflammation contributes to plaque buildup on blood vessel walls. Combine inflammation with an unhealthy blood lipid profile and we have a recipe for heart attack and stroke.

If chocolate reduces inflammation, it seems to do so mostly in women. Perhaps this explains women’s fabled love of chocolate?

On the other hand, if eating more chocolate eventually leads to a bigger waistline, any potential health improvements could be negated.

While chocolate contain saturated fat, it’s a unique variety of saturated fat known as stearic acid. Once consumed, a majority of stearic acid is converted into monounsaturated fat. This means it has very little effect, if any, on blood lipid levels.

Chocolate is one of the most popular sources of caffeine, which can create a mild dependence.

Chocolate stimulates some, but not all, of the same regions of the brain that are activated by drugs such as cocaine.

Chocolate creates feelings of pleasure because, well, it tastes good and triggers a positive emotional connection. Through an endorphin rush, chocolate also brings feelings of love.

White chocolate doesn’t seem to have the same effect, since it’s been stripped of cocoa solids.

Researchers have also identified a cannabinoid in chocolate, which triggers the same mood-altering brain receptors as marijuana. But don’t get too excited. Getting a marijuana-strength “high” would take about 25 pounds of chocolate.

Why does it seem like women crave chocolate more than men, especially a few days before their period starts? Well, we know that lower levels of the brain chemical serotonin occur at this stage of the cycle, so craving carbohydrate-dense foods like chocolate makes sense (since eating high carb foods can trigger serotonin production). Serotonin is an important neurotransmitter that can affect wellbeing.

People who claim they are “chocoholics” may have lower levels of serotonin. This low serotonin might be due to lack of pleasure and stimulation in other areas of life. How chocolate influences the brain

This is especially true if you substitute a few small squares of dark chocolate for high-fat dairy products, processed snack foods or cookies in your usual diet.

But hold on a second before you rip open that Snickers bar: We’re talking about cocoa here, not milk chocolate. The difference is monumental.

This means that you’re getting very little real cocoa per bite!

Real chocolate — the high percentage cocoa stuff — is another story.

Real chocolate has virtually no sugar, is high in fibre, and is loaded with maximal doses of antioxidants!

Here’s a comparison of four types of chocolate.

Notice that as you move along the continuum from pure chocolate to processed chocolate, the nutrient profile changes.

If you’re going to eat chocolate at all, get a high percentage cocoa.  This means at least 85%.

Look for organic and Fair Trade brands. Because cacao production is labor and resource-intensive, and occurs in countries that may not protect workers or the environment, commercial production can involve slave-type labor and deforestation.

Finally, most everyone on the face of the planet knows that chocolate contains a good amount of calories.  Consider this if you want to include chocolate in your Precision Nutrition eating plan. Because most types of chocolate have at least some sugar, incorporate it as a post-workout treat, and keep the portion size small.

Why Fair Trade chocolate is important:

Getting a fair price enables cocoa farmers to support their families.

Thousands of acres of rainforest have been cleared for new cacao trees. Without environmental stewardship, the rainforest soil becomes nutrient-poor. New cacao trees can only be planted on the edges of forests where natural tree falls have occurred.

When you indulge in chocolate, definitely look for Fair Trade Certified.

Some Fair Trade Chocolate brands can be found here.

Witch’s Broom is a fungus that can attack cacao trees.

Humans were once sacrificed to guarantee a good cacao harvest.

Refined chocolate is kept liquid by friction through a process called “conching,” which helps develop a smooth, creamy texture.

Some women say they prefer chocolate to sex.